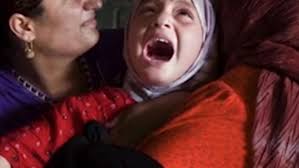 The Muslim threat is partly mathematical. Do the math, you’ll see the threat.
The picture above is a girl recieving FGM.
It seems that American feminists have quit fighting FGM since Hillary lost in 2016.
This is becausee they feel they need to import Muslims to vote for Democrats.
I doubt the existance of true Muslim-Americans.
Anyone who believes Sharia Law is superior to the US Constitution cannot be a true American.
While the US Constitution and the New Testament are compatable, or at least have their own place, this is not true with Sharia Law.
Sharia law demands preeminece, and demands its followers be willing to kill to establish it.
The New Testament allows for the legal preminance of civil law, like the US Constitution,
while pressing the Spiritual preeminance of the New Testament in our lives and on the Judgment Day.
One can be both a true Christian and a true American.
Though not well-instructed in Islam,
I have heard that Muslim men believe if they are killed in holy war, they will receive 72 virgins to entertain them throughout eternity.
Since males and females are born at a fairly equal rate, where do these virgins come from?
And sex in heaven? Jesus said it ain’t so, in Matthew 22:30:
“In the resurrection, people will neither marry nor be given in marriage. Instead, they will be like the angels in heaven.”
Angels don’t have sex. But Muslims are hyper-focused on sex. Let me explain why.
Before there were Muslims, there were Arabs. When Jesus rose from the dead, (500 years before Mohamed was born), Arabs were selling human flesh.
Arabs have long been slave traders, which means they have long-been rapists and sex traffickers, for who only trades in male slaves?
Slave traders also intentionally captured females for their personal pleasure.
Polygamy.
The Muslim culture trends toward polygamy; one man with multiple wives, which is another form of slavery.
Let’s look at the cascading, mathematical effects of polygamy.
Although polygamy existed before Islam, polygamy creates a dangerous society anywhere it exists.
Consider these numbers:
Males and females, worldwide, are conceived at a fairly equal rate.
If 1 Muslim man has 4 wives, then there are 3 Muslim men with ‘0’ wives.
3 lonely, horny men without the opportunity for sexual fulfillment. What do these men do?
1) They marry (rape) little girls, & leave the boys of the next generation without females to marry.
2) They rape sheep and goats, permissible under certain conditions in certain Islamic districts.
3) They marry young female relatives; with predictable genetic consequences.
4) They immigrate (invade other countries), intending to convert or rape the women in the country they move to.
Polygamy mathematically creates a sexually-deprived, sexually-depraved, intellectually-incompetent society, that results in either migration or civil war.
Any Islamic nation that cannot supply each generation of men with wives is a nation in danger of revolution.
The urge to ejaculate puts a man on a quest that will be fulfilled.
Muslim leadership knows this and harnesses this drive to conquer the world.
The United Nations now seems to be complicit in this plan.
To make this worse, I have read that with EU immigration, the sex ratio is 54% male, 46% female,
and many of those will be young dughters, so this is even worse.
Polygamy is also the reason for the hijab and the burka.
In a polygamous society, hordes of horny young men could not live in a nation when even the sight of a girl’s hair sexually arouses them.
To help prevent civil violence, the women must be kept at home, allowed outside only under cover, with a male relative as an escort.
If a female is attacked, she is blamed for arousing the male.
This is why some Islamic women cherish their burkas; it is their legal proof of modesty, which protects them from charges of arousing a male,
therefore inciting their rape, which could also get them flogged or killed.
Violated girls and girls who choose their own husbands are often killed by relatives, labeled ‘honor killings’.
Muslim fathers sell their daughters under the guise of 'dowry'.
Every Muslim man with a daughter has the opportunity to be a slave trader.
A raped Muslim girl is a financial liability to her family.
And a Muslim girl that chooses her own husband, steals money from her father.
Hence, 'honor killings'
As for FGM, harem owners found out long ago that women too have libidos.
If an 80 year-old man has 4 wives, there will be sexual demands made on him that he can’t satisfy; they each might wish for a husband to themselves.
That’s tough on the male ego. The solution for them, is to remove what they perceive to be the source of the arousal, the clitoris.
So these females then become mere sperm-toilets and functioning uteruses.
I also believe that muslim men do FGM on women partly out of jealousy.
After all, if men must be circumcised, leaving women unmutilated would men that they are fine just the way they are born.
That would mean that God sees women as more complete than women.
They misinterpret the real meaning behind Old Testament circumcision.
So what happens if/when Muslims successfully conquer other countries through immigration and sharia law?
The process will repeat until the world is full of multi-wife families and single, horny men. The streets will need to be patrolled with machine guns.
1 man with 4 wives = revolution. Numbers matter.
And… if their Allah can’t get them 1 wife on earth, how can he get them 72 wives in heaven?
Muslim math doesn’t add up. If we made all Muslims stay home, Muslim nations would implode.
But Islamic implosions sounds to me like an Rx for world peace.
Eric J. Rose